Dario Meloni compares his skydiving journey to a snowball. It began with casual jumping in Italy and gathered speed when he boarded a different kind of plane to the United States. It grew in size with each rating acquired until he found himself spending winters in Zephyrhills, Florida, working under one of the most renowned instructors in all of skydiving. Dario’s adventure has taken him all over the globe, through 3,400 jumps (and counting!), expanded his horizons, and landed him right here with us at Wisconsin Skydiving Center.

As a child, Dario didn’t know any skydivers, but that never stopped him from priming himself for his destiny. He describes himself as a rebellious kid; someone with a lot of free time that he happily filled with riding bikes, martial arts, and cliff jumping. Like many extreme athletes, he’s been drawn to high-stakes activities his whole life.

By age 14 Dario was zipping around the streets of Italy on his moped, dreaming of being a firefighter or joining the military. In addition to his adrenaline-seeking behavior, he loved playing with gear and completing tasks – attributes that would make him a perfect candidate for skydiving instruction later in life.

At 17, growing bored of finding ways to spend his time, Dario began searching for something new. With his military dream in mind, he found a course that would gain him extra points for entering the armed forces. The course would last six months and, at the end of it, he would get to make three static line, military-style jumps from an airplane. During his training, the cohort visited a sport dropzone … and that’s when young Dario got an enticing first glimpse into the wild ride ahead of him. 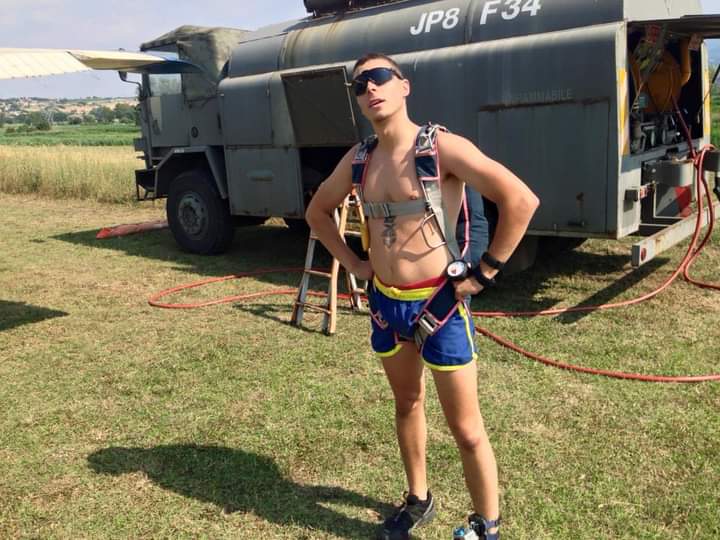 As soon as his six months were up, Dario went back to the DZ he’d visited; enrolled in their student program; and set his sights on achieving his sport parachuting license. Like almost all people who become skydivers, he was immediately hooked. Right after he graduated high school, Dario took on various jobs to fund his new hobby and spent as much time as possible at the dropzone.

Even as he went through his own student progression, Dario knew he wanted to be an instructor someday. He looked up to the people who taught him how to skydive. He respected them as role models and admired their tremendous breadth of skydiving knowledge. Though he had never formally taught anything to anyone before, he could see himself achieving instructor status.

Dario was laser-focused on growing his skills and learning as much as he possibly could. He began working at his home dropzone as a camera flyer. Having attended a cinema-focused high school, videography allowed him to seamlessly bring his passions together.

At 19 years old, Dario the full-time mailman and part-time skydiver flipped the script. He hung up his mailbag and fully committed to skydiving. With his eye still on instructor status, Dario joined a 4-way belly team and trained for competition. This, combined with camera flying, would help him perfect the belly flying skills he’d need to become an instructor. A few years into Dario’s jumping journey, life took an exciting left turn. The airplane owner at his DZ got an offer to pack up his plane, equipment, and staff, and open a brand new dropzone in Kuwait. This was precisely the kind of opportunity Dario was waiting for. He packed his bags and set off on the adventure of a lifetime.

Wheels Up - We Have Liftoff

In Kuwait, Dario met people from all over the world, some of whom were full-time professional skydivers. He had never met anyone who’d truly fulfilled that dream before, and he began working with them to figure out how to achieve that life for himself.

Dario quickly learned that successfully doing this full-time would require that he move to the US or Dubai. He started looking for opportunities online … and came across an opening at Wisconsin Skydiving Center that would allow him to be mentored and earn all of his ratings.

Once again, Dario packed his dreams into his luggage and headed out for a brand new life.

Dario’s leap of faith paid off. Life at Wisconsin Skydiving Center was exactly what he had been searching for. Fully immersed in a full-time dropzone, he was swept up with the culture of the place and in awe of the way everyone took care of each other. Everyone was having a good time, and Dario was all in.

Under the mentorship of our dropzone owner, Bo Babovic, Dario became a tandem instructor, an AFF instructor, a rigger, and a coach examiner. He earned his PRO rating – all within his first two seasons at Wisconsin Skydiving Center!

His relationship with Bo and the DZ empowered Dario to focus on his growth as an instructor. He started spending his summers in Wisconsin and winters in Florida working at Skydive Ratings, the preeminent skydiving school.

It’s a super-satisfying schedule that Dario has maintained. He enjoys the ebb and flow that comes with teaching skydivers of all levels – he does tandem and AFF instruction and performs camera jumps at WSC and then teaches experienced skydivers how to follow in his footsteps all winter long. The change of scenery and pace is rejuvenating, always keeping him fresh for what’s next.

Aside from instructing, Dario’s favorite part about skydiving is the time he spends under canopy. Everyone needs a break from the hustle sometimes, and Dario gets a power-up every time his parachute opens. He says that in contrast to the tasks to be completed in freefall, canopy flight is peaceful: “Everything slows down, you have time to enjoy yourself, by yourself.”

When he’s instructing, he enjoys AFF the most. It’s the ultimate game. AFF requires a complete repertoire of skills and, to Dario, that makes it the most fun.

Dario loves connecting with his students, and his teaching philosophy is grounded in mutual trust. He tries to reassure his students that jumping from a plane is much less intimidating than they think. Whether they are doing AFF for the first time or doing their first tandem as an instructor, nothing about it is superhuman. Success is all about being prepared, remaining calm, and having fun.

Listen to the Pro!

Dario’s advice for people wanting to follow his lead is to take it slow:

“Becoming an instructor is a long process. You cannot imagine how much you will learn and be responsible for retaining along the way. Stay humble, keep learning, and enjoy it. Always remember why you got into it in the first place - skydiving is fun as hell! Don’t lose the passion that brought you to where you are.”

As for his future, Dario is taking a bit of a breath to enjoy his success … and then he’ll continue toward attaining more examiner ratings, and would eventually like to become an examiner course director. He wants to be a master of all things instructional and is well on his way to doing what it takes.

We are grateful to have you as a member of the Wisconsin Skydiving Center, Dario! Have fun in Florida this winter, and we’ll see you when you get “home.” Blue Skies!