THE HISTORY OF SKYDIVING

Leonardo da Vinci said it best, “For once you have tasted flight, you will walk the earth with your eyes turned skywards, for there you have been and there you will long to return.”

Leo’s (we call him Leo around here) quote is one of the most popular in skydiving history. Though he made this statement back in the 1480’s, he touched on the spirit that resonates with anyone who has ever jumped. Skydiving does change the way you look at the world.

Though Leonardo eloquently made that famous statement and put together a beautiful sketch of a triangular parachute, he’s not the original mack daddy of skydiving. Just as the Chinese manufacture nearly everything we enjoy today, they got to skydiving first. The history of skydiving dates as far back as the 1100’s when depictions of early parachutes have been discovered, but it’s not clear whether these drawings ever made into a reality and test jumped.

Countless people have drawn parachutes and daydreamed of jumping them, but Andre’ Jacques Garnerin is credited as the world’s first skydiver (and test jumper). Monsieur Garnering made the first documented parachute jump from a balloon approximately 2,000′ over Paris (and you think they call today’s skydivers crazy). Not only did he jump, but he survived and would go on to make many more jumps! It’s ironic that Garnerin died in a construction accident when he was hit by a wooden beam while making a balloon in Paris on 18 August 1823. 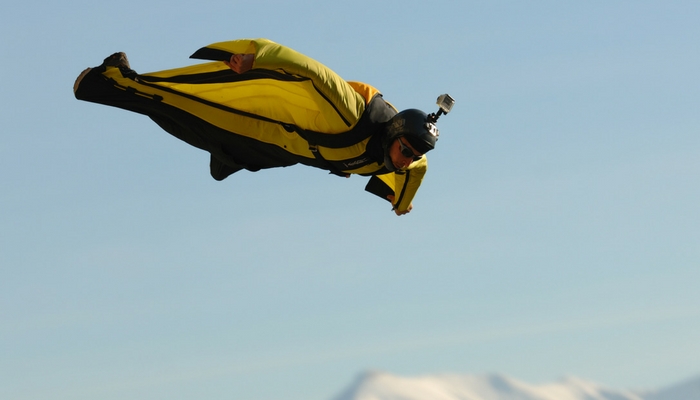 SKYDIVING AND THE MILITARY

While man has always been enamored with flying, skydiving was never a ‘thing’ that many people participated in (for obvious reasons) until military arms of government began seeing value in helping save the lives of pilots shot down during a war. World War I propelled the use of parachutes into the world.

In 1917, U.S. Army General Billy Mitchell suggested the use of parachute troops to enable soldiers to get to otherwise unreachable areas, with the Italian military credited with the first combat jump in 1918.

In 1933, the Soviets staged the first mass parachute drop when they dropped 62 parachutists from three bombers. They greatly expanded their parachute units and in 1936 dropped 1,800. Parachute regiments became commonplace in World War II, and many armies still retain their parachuting arms to this day.

With parachutes used so much in war, their development was accelerated. When the war ended, the parachutes became available for non-military use, helping to bring parachuting to the masses.

1100 – Drawings of parachutes by the Chinese.

1944 – Major airborne infiltration by the US 82nd and 101st Airborne Divisions into German occupied France.

1945 – 600 Parachutists of the United States 11th Airborne Division rescue over 2.100 U.S., British and Dutch prisoners, hours before they are scheduled to be killed by their Japanese captors, at Los Banos, the Philippines, in perhaps the most successful rescue of hostages in history.

1956 – First US Parachuting Team competes in the 3rd World Championships hosted in Moscow.

1958 – Sport parachutes are tested from jet aircraft for the first time in El Centro, California.

1959 – First civilian parachuting school opens in Orange, Massachusetts. The school is still in existence today and is now called Jumptown.

1960 – The amazing (and skydiving hero) Col. Joseph A Kittinger of the USAF, jumps from a balloon 102,800 feet above the earth to set the record for the highest jump ever made. The record would stand until 2012 when Felix Baumgartner would make the leap from 128,000 feet with the Red Bull Stratos Project.

1962 – For the first time, the World Parachuting Championships are hosted in Orange, Mass. The US Army’s James Arender wins gold on home turf. The victory was contested by the Russians as they were unable to get in their final jump due to mechanical issues of their aircraft.

1965 – Lee Guilfoyle makes a test jump on a parachute that’s more like a wing as opposed to a round parachute. The design would be called the Barish Sailwing. This early design would transform the sport with the transition of round to ram-air parachutes.

Early 1970’s – Relative Work (RW) starts to gain popularity with skydivers jumping with each other and building quick formations.

Mid 70’s – The square parachute (it’s a rectangle) starts to pass the round parachute in popularity within civilian circles. The military continues to use round.

1982 – The three ring release system is invented by Bill Booth. The three ring system allows for the rapid release of a malfunctioning main parachute; a valuable invention when time and altitude is of the essence!

1983 – Tandem Skydiving is invented by Ted Strong. This invention would revolutionize the industry allowing for more commercial operations to exist by offering skydiving to the general public.

1991 – Helmut Cloth invents the first reliable automatic activation device (AAD) known today as the CYPRES (CYbernetic Parachute RElease System). The CYPRES is a small computer system installed into a skydiver’s container (backpack) and reads attitude and speed. The device deploys a reserve parachute if a skydiver crosses 750 feet at high speed. This device has saved thousands of lives!

Today, skydiving has never been safer due to so much advancement in technology from the 1940’s onwards. While the main components of skydiving equipment are much the same, subtle refinements have led the way to new disciplines of the sport. With the introduction of wind tunnels globally, skydiving has entered into a new era of flight.

Gone are the days of falling. Today, it’s falling vertically, horizontally, seated or blazing the skies in a wing suit… with your friends.

There’s never been a more exciting time in the sport!