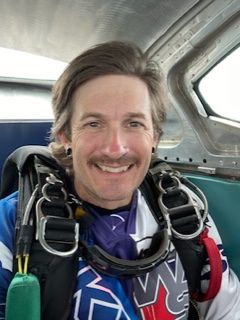 Few are suited to assume the role of an instructor. Fewer still are suited to be the type of instructor who enables others to champion their fears and assists them in ascending to new heights — in our case, both metaphorically and literally.

The role of a skydiving instructor requires mental fortitude, a calm demeanor, exceptional interpersonal skills, and, of course, the rare talent for relaying information in a digestible way to an often overstimulated student.

It just so happens Andrew Leith possesses each of these essential qualities!

At Wisconsin Skydiving Center, the instructors we hire are more than mere employees: they are cherished members of our skydiving community. So, without further ado, allow us to introduce you to one of our own: instructor extraordinaire, Andrew Leith.

The Journey to WSC

Born in Denton, Texas and raised in Albuquerque, New Mexico, how did Andrew end up in our midwestern neck of the woods? Like any captivating tale, this one has a few chapters.

Andrew served in the Air National Guard for 22 years, and in his words,  “came to the skydiving game late.”

At the age of 34, like so many, Andrew received a tandem skydive as a birthday gift. However, unlike many, from the very first jump, Andrew knew becoming an instructor was what he wanted to do.

As a man of action, he wasted little time. Andrew’s first tandem skydive took place in August and by September he had begun the process of learning to skydive.

Six years after learning to skydive, Andrew began contemplating getting his tandem rating. As luck would have it, Kt, a friend of Andrew’s in Albuquerque, happened to originally hail from Wisconsin and encouraged him to contact Bo, our DZO. So that’s precisely what Andrew did, and in his succinct words “that was that!” 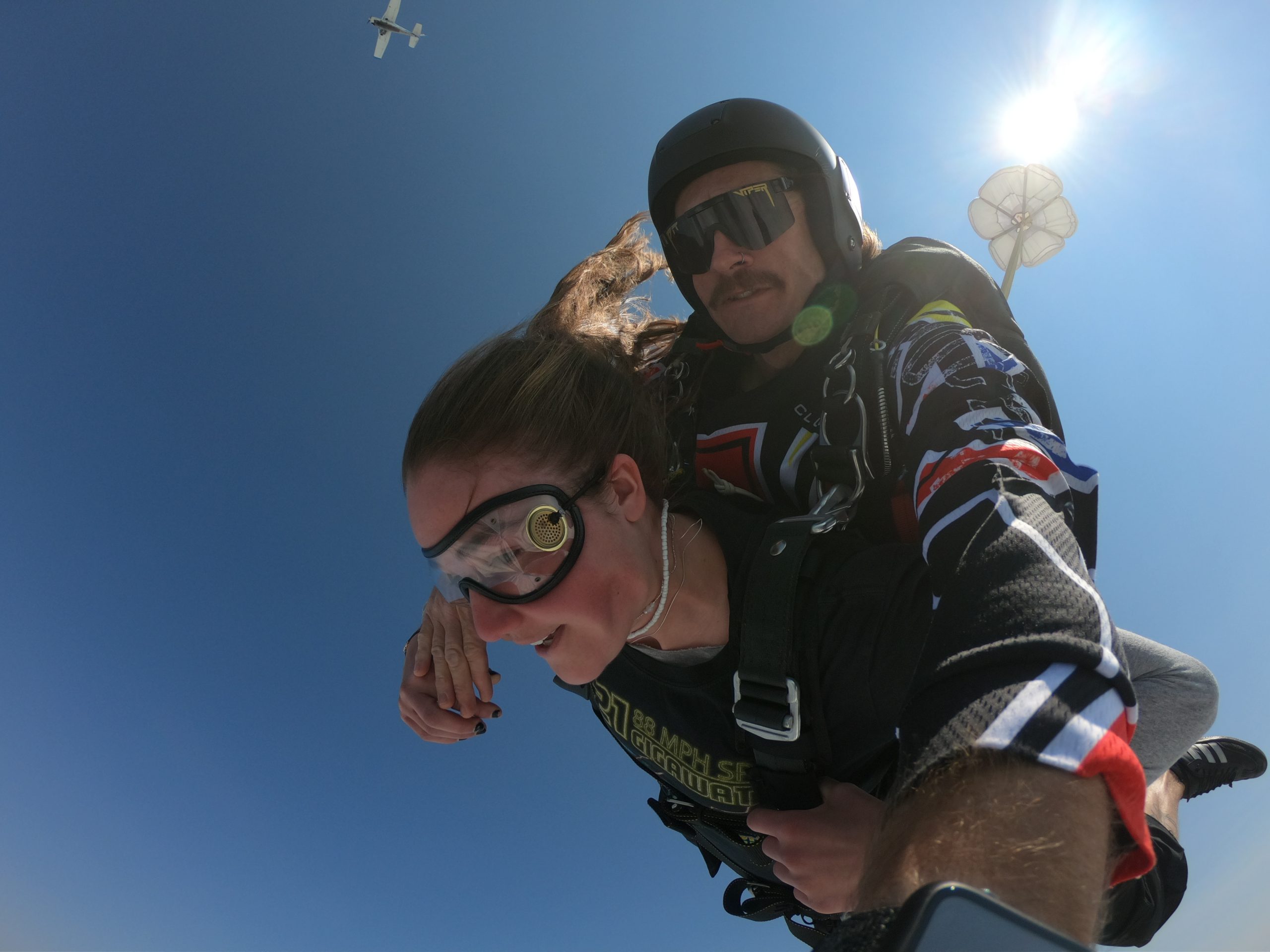 Fulfilling an instructor role came fairly naturally to Andrew. In fact, before becoming a skydiving instructor, Andrew had been a Karate instructor: “Already having been an instructor in something, I knew how cool it is to take someone, teach them, and to then see when the light bulb comes on and the progress they make.” 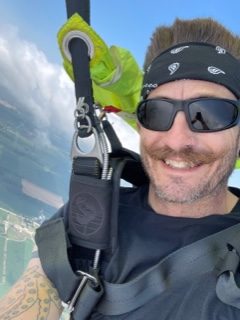 It wasn’t long (two years, as a matter of fact) before Andrew returned to WSC. Why would he leave the hustle and bustle of a year-round, large-scale skydiving operation for the seasonal, slightly smaller operation at WSC? Two words.

“At larger dropzones, everything is just go, go, go and it can be ‘cliquey.’ At WSC it’s a tight-knit community, and there is more of a sense that everyone’s input matters. At WSC, we make decisions as a group, not individually. I went, and I did the big dropzone thing, but the vibe was different. In the winter, I am going to have to go somewhere else, but that’s not a big deal to me because I know it will be temporary, and I’ll get to come back to the culture at WSC”

The appeal of working full-time as a skydiving instructor is threefold for Andrew:

“At the most basic level, I get to jump out of an airplane every day. The second is that I get paid to do that. The third is that I get to take people on this amazing experience and watch the roller coaster of emotions, as it were. I may see them scared or anxious, but also excited, and then maybe through a whole range of emotions. But when you land, it’s a completely different person. Getting to watch and to guide someone through that is pretty cool.”

Although Andrew was initially concerned about the toll being a full-time tandem instructor could have on his body, he has found that through an alcohol-free lifestyle, weightlifting, and cardio he is able to take care of his body and continue this rather physically demanding job without issue.

As of this writing, Andrew has a total of 4,846 jumps to his name – 3,000 of which have been with tandem students. He has also earned his rigger’s ticket and has been an FAA-certified Senior Rigger for two years. Not one to settle, Andrew has even greater goals on the horizon. He currently aspires to become an FAA Master Rigger and to also become an Instructor Examiner.

As someone who works with different types of skydiving students, Andrew has jump-specific advice to help prepare new skydivers for the experience. For tandem students, Andrew’s advice is this: “Have fun …Take a deep breath and try to enjoy the moment.” 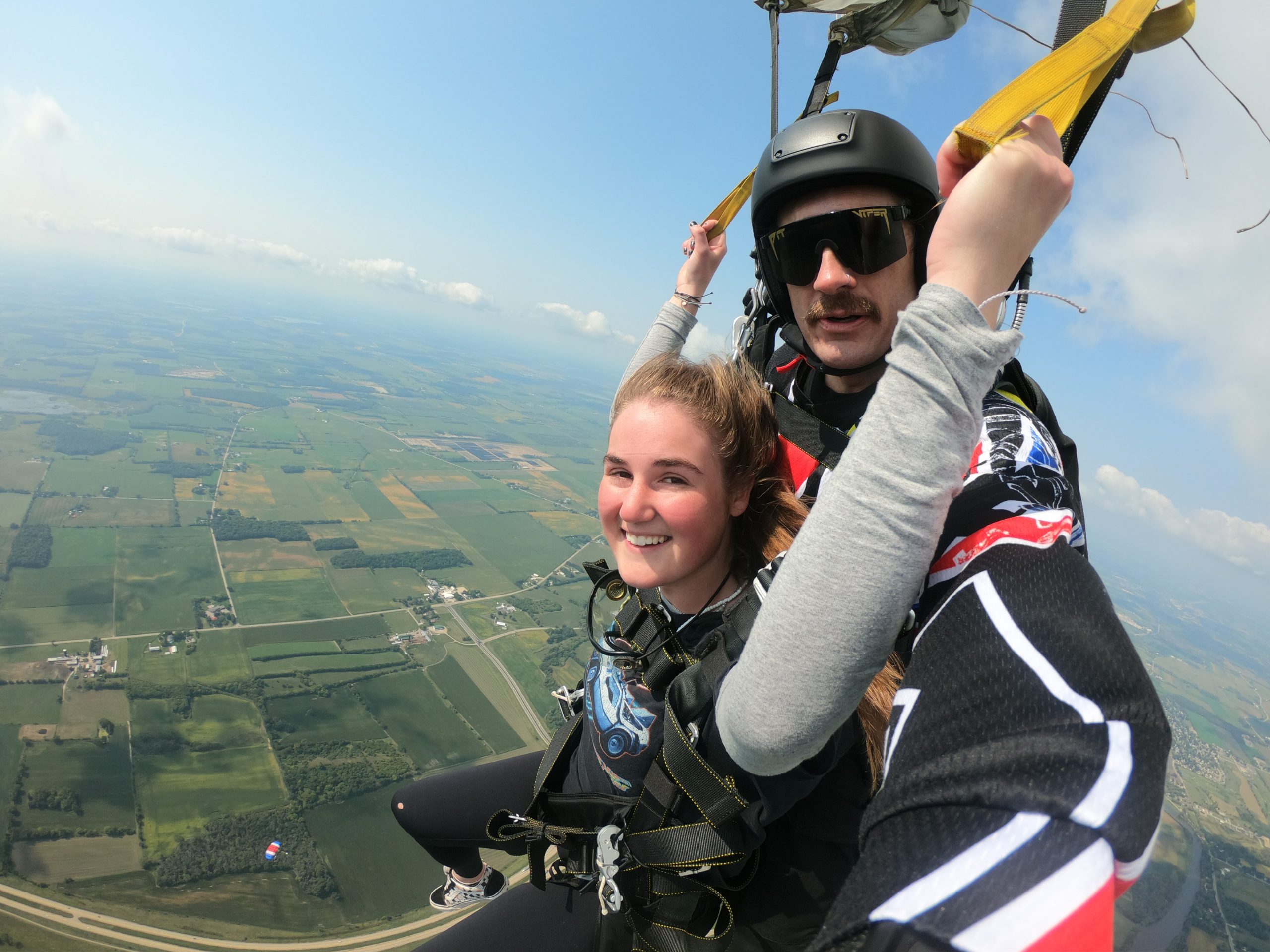 For students learning to skydive, Andrew says “the biggest piece of advice I’d give is to be still. Naturally, when you jump out of an airplane, you start grabbing for everything. But there’s nothing to grab onto, so just be still. The less you move, the better off you’re going to be. It is hard to do. Your brain is correctly telling you that you’re falling, and what do we typically do when we trip and fall on the ground? We catch ourselves. In the sky, you’re tempted to react to that sensation of falling, but you shouldn’t respond. It’s one of the most difficult things to grasp: but just try to stay still and only move a little bit when you need to.”

Do you think it’s time to give this skydiving thing a try? At Wisconsin Skydiving Center, we’re ready when you are! Whether you’re looking to let loose with a tandem skydive or want to challenge yourself to learn to fly solo, our teammate Andrew Leith is happy to help you reach new heights!

What do you say? The start of your journey is only one click away.