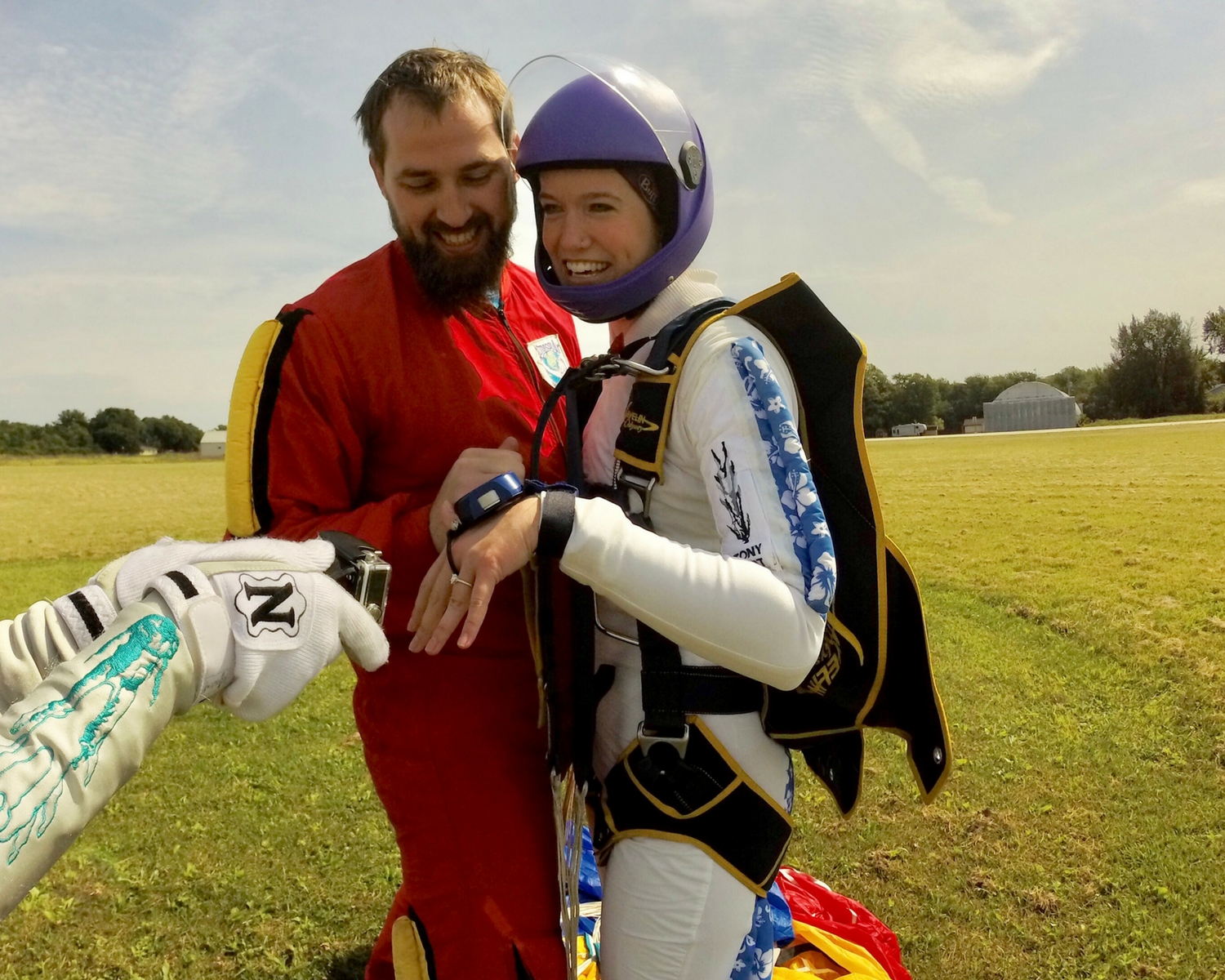 Brad Strock and Kelsey Perkins were on vacation, hiking and sailing around the country. The two lovebirds–hard-charging professionals–had met at work, first knowing each other tangentially and then gradually transitioning into closeness. The two started dating about a year after meeting, and it was becoming clear to both of them that this was forever.

“It is so easy as professionals to just blink and notice that a year has gone by,” Brad says. “In Croatia, we got to get away by ourselves for two weeks and really reset. We made a pact to each other out there to make sure that we are always growing together.”

“On vacation, you have a lot more time to reflect on how you want to spend your time in the real world,” Kelsey adds. “So the two of us spent a lot of time talking about the things that we can do so that we can continue to grow as a couple and also as individuals. We both really enjoy having goals to work towards that aren’t work-related.”

It’s not surprising that skydiving came up as a way to do so.

“I had wanted to get my skydiving license since I was a teenager,” Kelsey grins. “I lived across the street from a small airport and they would occasionally do demos at the airport. I just thought it was the coolest thing, seeing these really experienced skydivers come in for an air festival or whatever other event they were putting on.”

She didn’t wait long to join them. As a matter of fact, Kelsey did her first tandem jump at the first possible moment: on her 18th birthday, much to her mother’s chagrin. Soon afterward she started an AFF course, because her school–Ohio State University–offered an Intro to Skydiving for elective credits, where local skydiving instructors would come to campus to administer ground school. She did a couple jumps with them, but her starving-studenthood caught up with her. She ran out of time and money, so she put skydiving on a high shelf while she focused on her education.

As it turns out, Brad wasn’t brand-new to the idea of jumping, either.

“I did my first tandem in Australia,” he enthuses, “And loved it. I loved the focus of it.”

“When I mentioned it to him, it just seemed perfect,” Kelsey grins. “Everything that was standing in the way had dissolved. I said, ‘Now that we’re adults with salaries, we could probably actually do this thing,’ and he was, like, ‘Yeah, I am totally into that.”

When the pair got back from their trip, they made a beeline to the Wisconsin Skydiving Center, knocked out their ground training and made a respectable number of jumps.

“It was the Fourth of July weekend, so that was helpful,” Kelsey remembers. “The long weekend meant that had a couple of extra days off to make a lot of jumps. We made a lot of friends who were all out at the dropzone for the Fourth of July as well. That kicked off our AFF journey together on a high note.”

A month and a half went by. Brad and Kelsey did their check dives and spent the next two weeks dialing in their parachute packing skills. Licenses finally in hand, the pair were stoked: They were officially able to jump together. What Kelsey didn’t know was that Brad had been spending quite a bit of this time scheming in the background. His plans were about to come to fruition. The first thing you need to know, dear reader, is that skydiving connects with Kelsey much more profoundly than her simplified story would imply. Skydiving is a connection she shares with her departed father, and she feels that connection very deeply.

“Anything that Kelsey can do that helps her connect with the memory of her father is really important to her,” Brad explains, “So I knew this was the way I wanted to propose. I couldn’t imagine not having skydiving be part of the proposal itself.”

“My dad was a paratrooper,” she explains. “Like me, he was always very fascinated with air shows and flight in general and had racked up a good number of jumps himself. He passed away from cancer when I was quite young.”

“My family’s symbol for my dad,” she continues, “Has always been a Monarch butterfly. He was a big Monarch butterfly enthusiast when he was with us, and Monarchs tend to show up at opportune times in our lives. For example: When I was getting ready for my first AFF jump, a Monarch flew right by me at the dropzone.”

A Monarch also flew by Brad at the dropzone the day after he asked Kelsey’s family for her hand–and again while he was speaking in private with Bo to discuss his proposal plans, though she didn’t know what they were talking about at the time.

“They were sitting on a picnic table at the dropzone,” she muses, “And I was standing back, just watching them chatting. I saw Monarch flew between them. How cool is that?”

“I finally got the ring,” Brad laughs. “It was delayed for a while, and I was really nervous about it. I wanted my proposal to be on our first licensed skydive together, but the ring kept getting delayed. I had to delay my licensure a little bit to make it work.”

It was August 26th: a gorgeous Saturday, mantled with perfect blue skies. The couple were getting ready to celebrate their first licensed jump together, but there was something else in the air that Kelsey couldn’t quite put her finger on.

“I noticed that people were being weird,” Kelsey grins, “But I didn’t put together why.  One of the girls that we were jumping with was super giggly about the dive flow–a girl who usually doesn’t act like that.”

“One of the most terrifying parts of the whole process was going up in the plane with the ring in my jumpsuit pocket,” Brad remembers. “I was tapping on it the whole time to make sure it was still there.”

“We did a linked exit,” Kelsey says, “And thought we were going to get a bunch of points, but ended up just chasing each other around in the sky, having fun. When I was under canopy in my pattern, I saw what looked like a bunch of people driving out to the landing area in golf carts. It didn’t make sense. We didn’t have any tandems on the load and it wasn’t windy.”

Kelsey landed and started picking up her canopy, still oblivious, as Brad took off his harness and came marching over.

“I thought how nice it was that he was coming over to give me a kiss,” she smiles. “And then he held out a ring and got down on one knee.” She immediately gave her enthusiastic yes–and burst into happy tears.

“And that,” Kelsey laughs, “Is when everybody ran over with their GoPros.”

When the twitterpated pair walked back over to the hangar, they saw the whole Wisconsin Skydiving Center community standing around with their binoculars out.

“I guess Bo had been out there giving a play-by-play of what was happening,” Kelsey says. “It was adorable. There were congratulations and hugs all around. It was the perfect group to be with to celebrate. WSC feels like a second family.”

“They make you feel like family the minute that you get there for your very first class,” she continues. “It’s not the kind of place where you have to do hundreds of jumps before they’ll take you seriously. They really want you to be successful; to celebrate your successes with you. They are there for you when you mess up. It is just really cool to walk in there with only three jumps under your belt and have everybody greet you with hugs and asking about how your weekend is going and get really excited about what you are about to learn that day.”

“Every person there looks out for each other,” she adds, “And prioritizes connecting with each other and growing with each other. From all of the instructors to all of the people that you are jumping with, everybody at WSC is just really excited for you to learn new things and have new experiences.”

Brad and Kelsey are showing no signs of slowing down. On the contrary, they’re out here with us pretty much every weekend. The couple’s plans going forward contain lots more skydiving: a jumping honeymoon, for instance–and recruiting all their friends to jump, too.

“I was talking to loads of our friends about skydiving at our engagement party,” Brad grins, “And we’re trying to get as many of them as we can to do tandems this weekend. Two are already sold on it, and I’m trying to get two or three more up there just because I want everyone I care about to experience it. It’s fantastic.”