From the first moment you arrive at the Wisconsin Skydiving Center, you can already feel it: The energy of the place. WSC is different than any other dropzone on the planet, and that’s because of the underlying philosophy of culture that drives it. Every detail of that culture is upheld sacred by the truly unique staff that populates the center, and every detail of that culture comes from the heart and mind of the DZ’s co-founder, Bo Babovic.

Bo Babovic has a deep history in skydiving. Now 60 years old (and skydiving for 42 of those years), Bo has racked up three and a half decades as a skydiving instructor. Bo’s teaching career spans continents and cultures, and his life story–as well as his general approach to life–is as unique as the DZ he has founded. He does pretty much everything differently.

For example: At 7:00 a.m. on a normal dropzone, the scene is pretty predictable. Several instructors will screech up to the dropzone, clutching tanker-sized coffee thermoses, loud music thumping from the stereo speakers, rubbing the sleep from their eyes as they hustle into the hangar. By that time at WSC, quite a bit has already been accomplished: Bo has generally been up since 4:00 a.m.

“By that time, I cannot sleep anymore because I am excited,” Bo explains. “I want to get down to the dropzone and get started. I drink coffee because I like the taste of coffee–the taste, the aroma–but I don’t need it. What makes me get up in the morning is the thought of being a skydiving instructor; of living that reality, which is something that I often just cannot believe that I actually get to do.

For me, skydiving instruction is so multidimensional. I have this feeling that I was born to do exactly this. I could have been in many other things; I have a lot of interests, but I was born to do this. It feels like it almost came from within.”

"All human beings crave intimacy and interpersonal closeness, but we live in this cynical world in which we build walls and then we sit lonely behind them. Skydiving allows us to bypass all that. That is what we do here. It is on a different level." 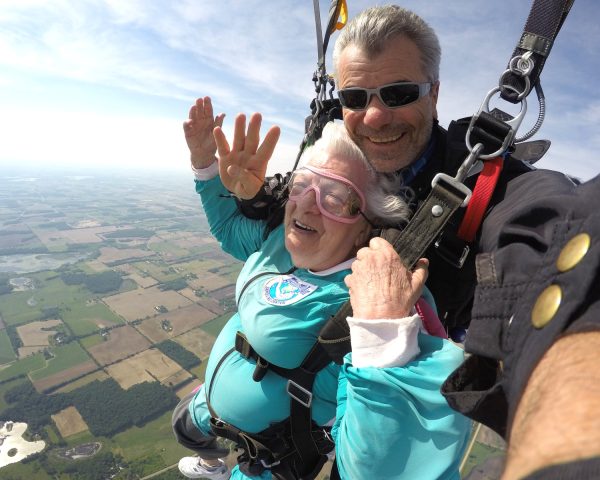 Bo started skydiving in 1975, as a static line student in his native Serbia. Back then, Sebia was deep in the socialist, communist world. There was no place where you could go and pay to make a skydive. It was government- and military-sponsored activity, and potential jumpers had quite a few hoops to jump through before they could jump through the door of a flying airplane. First, you had to qualify; then, you had to pass four months of classroom instruction; then, you could jump. When Bo signed up, he was informed that the club was doing only one class per year. It started in December.

“The whole winter, we were taking classes three times a week,” Bo remembers. “We spent every winter weekend at the dropzone, practicing packing, so by the time spring came around we were in top physical shape. We knew how to pack both the main and the reserve. We had to pass numerous exams, including some on meteorology and aircraft design and construction. So–what now takes four hours took me four months, maybe more. But I didn’t mind. I didn’t know any different. That was my frame of reference.”

At long last, after years of jumping, Bo was able to come to the States. Suddenly, all that intense training in Serbia was mightily challenged.

“When I walked on to the first dropzone I visited in the US,” he remembers, “It was, like, Oh my god. This is a different planet. It was awesome; I can hardly describe it.”

In a way, the dropzone wasn’t totally unfamiliar. As a young skydiver in Serbia, Bo was always obsessively paging through the old Parachutist magazines that would somehow find their way out to the Iron Curtain fringes. They were usually at least three years old by the time they arrived in his waiting hands. He couldn’t read in English at that time, so he was mostly just looking at the pictures–but he looked at them with studious intent.

“I built up a library of all these pictures in my head of equipment; people; airplanes,” he continues. “Through those photos, I was absorbing the energy of a US dropzone. I had this pretty crazy feel of American drop zones without ever being on one, so my first moment there felt like I had stepped into something I knew. All those mental pictures came alive and turned into a moving reality.”

The very next weekend, Bo did his Tandem Instructor course. He completed the course over the weekend; by Sunday evening, he had started doing tandems. Even then, Bo still had a long road ahead of him.

“When I arrived in the U.S., I had to actually re-train myself in many ways,” Bo wryly acknowledges, “And

change my perspective on a lot of things. In Serbia, I had received a lot of wrong information. Our gear was backward and our training techniques were backward. So I almost had to learn almost everything all over again. It might sound harsh and unnecessary, but in retrospect, it was one of the best things that ever happened to me. What I acquired back there was stamina; resilience. Being in Serbia, I was held back for a long time. Then once I got here–and got out of the gate–I felt like I was in heaven.”

“From jump one,” he enthuses, “I knew that this was what I wanted to be. It was Friday, May 13th, and everything that happened after that has been moving me down this road. I worked hard and I became a skydiving instructor, and then the next step was to work hard to have my own school because that way I could really bring skydiving instruction to a different level; a different depth.

I knew that having my own school would mean that I could really bring more meaning to the whole thing, and it certainly has. I never wanted to just stay on the surface and teach new students how to exit the airplane, or how to do this move or that move–but rather to go deeper into why. Into the psychology of it; deeper into the biology of it. It’s a quest to collaborate with our students in digging for deeper meaning. Why are we committing the apparently senseless act of jumping out of an airplane?”

According to Bo, that reasoning has absolutely nothing to do with ego. Unsurprisingly, ego tends to be a dominant driving force at a large number of the world’s dropzones. At WSC, Bo and Alex (wife and co-founder) and the team have intentionally replaced that ego-driven atmosphere with one of teaching and learning; of care and love for the sport; of appreciation for this camaraderie and for this collective that is the DZ’s skydiving community. Where the tandem skydiving experience has been “degraded into a cheap ride” in so many places, it’s a sacred space for growth on Bo’s home soil. And for Bo, ingraining this philosophy in the next generation of Tandem Instructors is the vital next step to creating this unique culture on his own dropzone.

“I am an instructor examiner,” he explains, “And when I train instructors, while a good part of the training I deliver is obviously mechanics, procedures and all that, I also talk a lot about the student’s headspace and emotional management, because I think that is where real safety is in this sport.  We talk a lot about what it means to be a role model for tandem students; about how this work represents the opportunity and privilege to touch another life on a very deep level.”

Unsurprisingly, the staff of WSC instructors trained in this manner–and specially selected for their stellar interpersonal qualities–craft a totally unique experience for the tandem students they lead into the sky. “Our instructors here believe, as I do, that we are in it together,” Bo says. “I always tell them, If you do not connect to every student, you are going to get burnt out. Our guys do not get burnt out. We structure the work to ensure that our instructors have a rich life outside of the dropzone and always stay fresh and engaged. All my guys are accomplished. They are good people, and they’re successful in life as well as on the dropzone. That’s not the case on so many other DZs, and it changes the energy completely.

I know that our tandem students here at our drop zone have vastly greater experience than any other tandem student on this planet. That is because it is intentional. I want each student to experience this cathartic moment; this life-changing energy.

All human beings crave intimacy and interpersonal closeness, but we live in this cynical world in which we build walls and then we sit lonely behind them. Skydiving allows us to bypass all that. That is what we do here. It is on a different level.”

That’s a tall order–but forty-two years on, Bo has no intention of ever stopping.

“I am a teacher. I love to teach. On top of that, I love skydiving. Combined together, that has kept me going for all these years, and I still cannot get enough of it. At the end of the day, I’ll be sitting there with my staff on the porch, watching the sunset and drinking a cold beer, and we all have a deep sense that we touched lives today, and there are a lot of happy people who are happy because of us. The details of their lives may still be the same as they were that morning, but they are having a different, and better, experience of

life because of us. To me, that is the greatest gift you can give.”