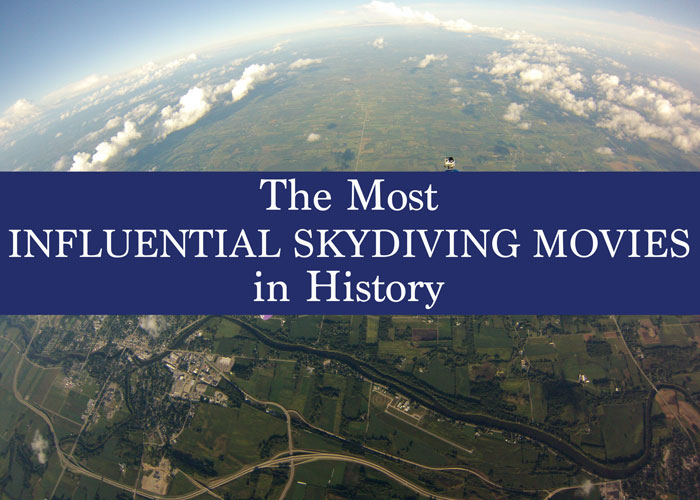 There have been many movies made about skydiving, but few motivated people to come to the dropzone in droves like our list. For you skydiving movie purists… DropZone and Cutaway didn’t make the list (sorry) as the cheese factor was over the top! (Blasphemy!) We’ve put Fandango in at 6 as an honorable mention because it’s a classic, but it may have scared people more than got them to a dropzone!

1. Point Break (1991) – The heyday of skydiving was definitely in the early 90s. ESPN featured skysurfing on the X-Games, the World Free Fall Convention began in 1990 and Point Break came out in 1991. The movie showcased jumpers enjoying five minute long, conversation filled free falls (that happens right?). Yet, despite its liberal use of poetic license, Point Breakcaptured the imaginations of future skydivers everywhere resulting in a surge of new memberships with the USPA.

3. James Bond – One of the biggest movie franchises in the world, skydiving has been showcased in lots of Bond movies through the decades and inspired thousands of people to become skydivers. Here are a few movie titles and video clips of these epic skydiving scenes.

There are so many great skydiving clips, we may have missed a couple – if we did, let us know and we’ll add it to the list!

4. Honeymoon in Vegas – The Flying Elvises featured in this film captured the imaginations of thousands and would become a demonstration jump favorite!

5. The Bucket List: What did we call our ‘bucket list’ before the movie came out? I think it was “Things I Must Do Before I Die List.” Needless to say, having Jack Nicholson and Morgan Freeman jump in the opening scene of the movie brought people to skydiving centers in droves! Check out the clip… love the drogue-less tandems and conversations in free fall!

Truman Sparks is a legend and Fandango captured the barnstorming, safety-lacking days of the sport from back in the era of the 60s / 70s. Hilarity to the max… anyone can skydive…right?