The official celebration always takes place on July 4th, but don’t be fooled: on July 3rd of 2018, the Wisconsin Skydiving Center will celebrate exactly 20 years from its first jump. And its tale reads like a blueprint of how to start a skydiving business. 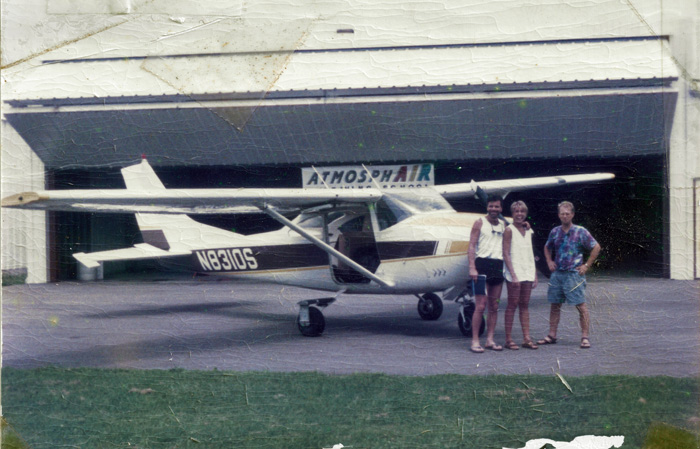 Starting a Dropzone: A Love Story

“It’s crazy how time has gone by,” Alex says. “When we first started, I was always embarrassed when people would ask me how long I’d been skydiving. I hated saying one year because I felt like I should be more experienced. Now it is scary to be on the other side: I’ve been jumping for 21 years.”

Twenty-one years in the sky: Now that is love. And it’s not one-sided, either… as a matter of fact, the entire story of the Wisconsin Skydiving Center is, more than anything else, a love story. It began on June 25th, 1997 – the day the owners, Alex and Bo, met and fell in love – and there’s no end in sight.

“I was almost 40 years old,” Bo remembers. “I had about 7,000 jumps and over 20 years in the sport. Alex was a novice, with a few months in the sport and 35 jumps. But despite the difference in experience, we shared a crazy passion for skydiving.”

“On our first few dates,” Alex adds, laughing, “all we would talk about was landing patterns.  That was what our dates were made of: sushi and skydiving landing patterns.” It worked; they were partners within a month.

How It all began

Alex may have been new, but Bo had been talking about landing patterns for a very long time before those first dates. He started skydiving in 1975, and had been teaching for more than 20 years when he met Alex. Before establishing AtmosphAir (the previous name of the Wisconsin Skydiving Center) in 1998, Bo had worked at dropzones of every flavor, all over the US. By the time Alex walked into his life, he was nearing the end of his rope. He loved skydiving, but he didn’t love being part of dropzones that didn’t share the high standards of his values and vision. He was looking for new horizons. When Alex – a beautiful, brilliant businesswoman-entrepreneur in the import business – expressed interest in getting involved in that vision, it felt like a Godsend.

“[That previous dropzone] was one of the greatest disappointments of my life,” Bo winces. “I came in with all this energy, to a beautiful place, but the vibe there was terrible. Within two years, I was crushed. When Alex and I met,” he continues, “she was a sign: time to move on.”

He invited Alex to work the manifest desk. Despite her low jump numbers, she caught on predictably quickly – and, over time, started to realize why Bo was unhappy there. The staff was unmotivated. Turnover was high. Even Bo’s business partner seemed uninterested in supporting his efforts to improve the scene. Alex split her time. During the weekdays, she’d look after her import business; on weekends, she’d be at the dropzone, working the manifest desk and racking up jumps.

“I had barely any jumps,” Alex says, “but I would be invited in to all of the big stuff anyway. Bo and I would dive out of the plane together, and he would hold my hand and pull me into the formation.” 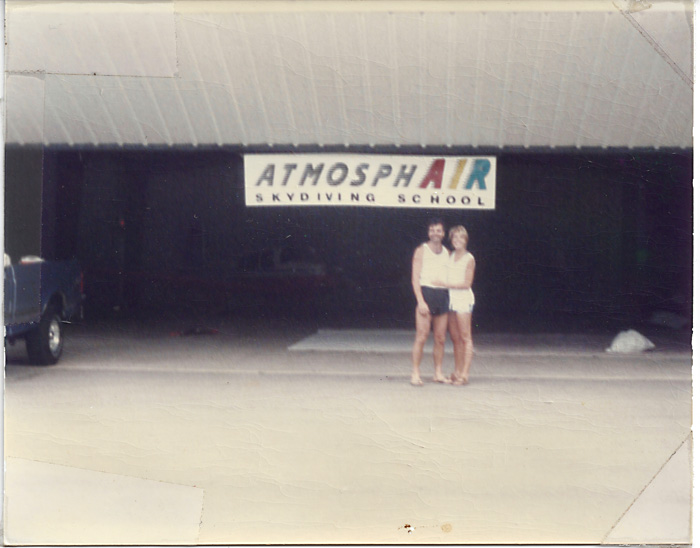 That next winter that Bo and Alex were together, Bo found a buyer for the dropzone. He and Alex concocted a fantastic plan to move down to the Caribbean and start a tandem operation. They traveled down to look at a few potential places. Alex started an exit plan for her own business, thrilled by the prospect. “We were going to be beach bums and do two tandems a day,” Bo laughs. “It was a great plan.”

Of course, everyone knows what happens to great plans. “On our first weekend as non-dropzone owners, we were having an amazing time fun jumping,” Alex says, “and we met a guy who invited us to come to Wisconsin to consider re-starting a dropzone business that had shut down over the winter.”

On the long Memorial Day weekend, they set out for Wisconsin to check out a dropzone near Madison. They met with some jumpers from that dropzone, but it didn’t look like a viable solution. “Because it was a long weekend,” Alex says, “we had time. We visited every single airport between that one and Chicago. At some point, we ended up at the Fort Atkinson Municipal Airport. We rolled into an abandoned parking lot. There was this beautiful paved runway, and it was quiet. Absolutely nothing was happening. There were no airplanes to be seen, just a few hangars here and there. Immediately, I told Alex this is the place,” Bo says. “She was, like, Come on, how do you know?  I said I just know; this is the place. It was meant to be.”

The first step in any dropzone, as you might intuit, is to ask the authorities for permission to provide the service of throwing people out of airplanes. Usually, this is a tall order – but, when Bo and Alex went to the city, magic happened. Normally, when a new operation goes to the officials and mentions the word ‘skydiving,’ everybody hides. The reception they received, however, surprised them both: Absolute positivity. The potential of a skydiving school downright thrilled the authorities that are traditionally nothing but reticent.

“It was kind of divine intervention, when you think about it,” Bo muses. “Our plan was to go south to the Caribbean and start a tandem operation, which, in my heart, I know wouldn’t have made me happy, because I wanted a school. I didn’t truly want tandem only, even though it would have been much easier; I just wasn’t really aware of it at the time. Hence, the divine intervention: We went north.”

It was only one month from that moment until the dropzone’s first jump. In that single month, Bo and Alex talked to the city, bought the airplane and racked up a couple of rigs. “That was that,” Bo says. “In 30 days, we took it from an idea to our first jumps.” “We were the only staff,” Alex laughs. “Just Bo and me.”

At first, AtmosphAIR – as it was then called – just occupied part of a hangar. There was another airplane stored in there, too, and some of that aircraft owner’s equipment. Bo draped it in some old round parachutes. They put wheels on the bottom of the ugly floral couches that came with the space. In the evening, they would wheel them out onto the taxiway, watch the sunset and enjoy a beer. 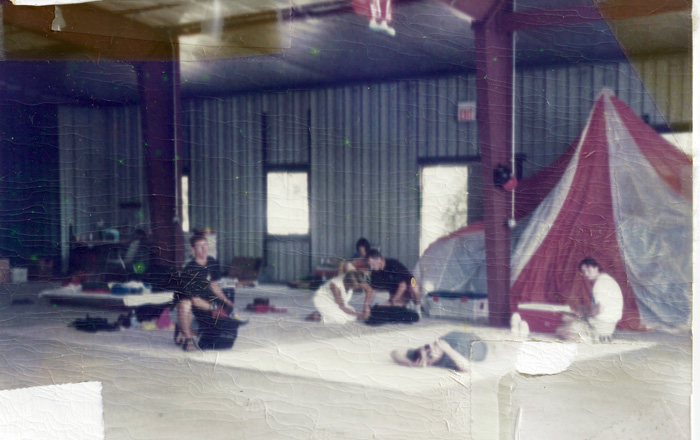 “I knew I wanted a small dropzone,” Bo explains. “I realized I would never be able to turn around a big dropzone, culture-wise. And that’s how this drop zone was conceived: as a good place with a good vibe, a good training center, good comradery, no drama, no politics, no egos. That was our guiding principle when we started this place.”

The first few year of running the dropzone

The first months were pretty scary. Nobody knew that the little dropzone was there. Back then, business still ran on the yellow pages, and it took the operation a full year to even come up as a listing. There we some beautiful sunny weekends that Bo and Alex were standing at the ready at the new dropzone and nobody would walk through the door. Regardless, Alex earned her AFF rating as quickly as she could.

Slowly, the hardworking pair started certifying people. They hand-selected some packers, pilots and other staff to join their little team. The second plane came online a handful of years later. In 2007, they built their own hangar and moved slightly north on the airfield.

“Now we are in our own spot,” Bo grins, “and our hangar is exactly the way we wanted it. We’ve grown every year – nothing crazy, super-intentionally, but we’ve grown. It wasn’t random,” he adds. “It was totally intentional. To me, the most important piece of our story is the culture we have created. The vibe; the ambiance. We knew exactly what we wanted, starting out. We knew the feel, the rules of engagement, the social fabric of this place before it even happened. We wanted our new dropzone to be great, not big.” 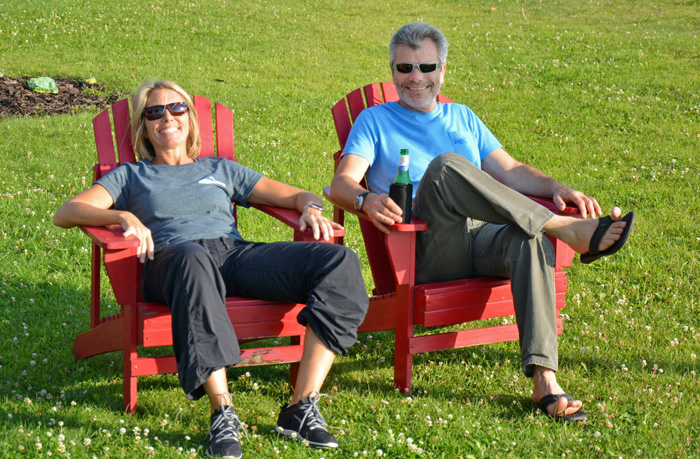 There have, of course, been ups and downs. Both Alex and Bo are quick to say that they’ve learned plenty of lessons along the way on how to start a successful skydiving business. But – in 20 years – they can only think of two instances of culture turbulence. Both happened when they added staff, and neither of them was earth-shattering – or even terribly disruptive. “Nothing that could potentially compromise what we have built,” Alex says. “That’s because we always knew what true north is.”

“Honestly, 9 out of the 10 people who work with us are pretty much our skydiving ‘kids,’” Bo smiles. “That provides reinforcement. The culture is rugged, in the sense that when you take in someone from the outside who is not as emotionally and spiritually involved, this place acts like an organism. There is an immune system in place that rejects or at least minimizes any negative influence.”

At the cusp of its 20th anniversary, the Wisconsin Skydiving Center is stronger than ever. Bo and Alex, still very much in love, have added three children to their family over the years that WSC has occupied this beautiful Wisconsin airfield. The staff is as thick as thieves. And the skydiving community that calls WSC home constantly fills the space with love and laughter. 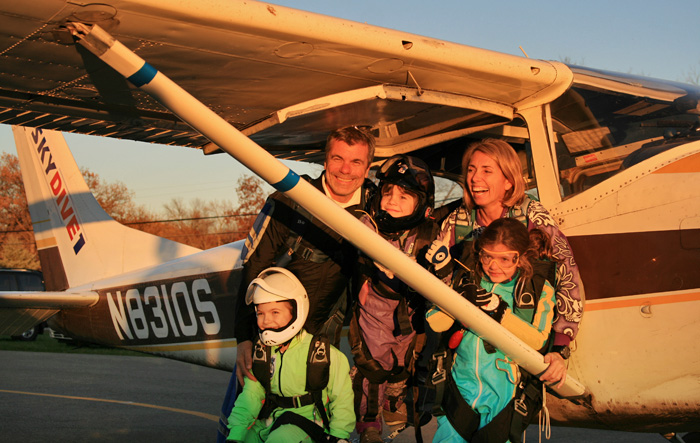 “Over the years,” Bo says, “we have surrounded ourselves with great staff and a truly great following of customers and tandem students. We have many students that come back, year after year, with their families and friends. It’s like family walking through our doors. We’re so proud to say,” he adds, “that we have gotten exactly what we have set our intentions for. And the way we sustain it is simple: We never stop walking in the same direction. That’s it.”

So come join the family – book your tandem jump today!