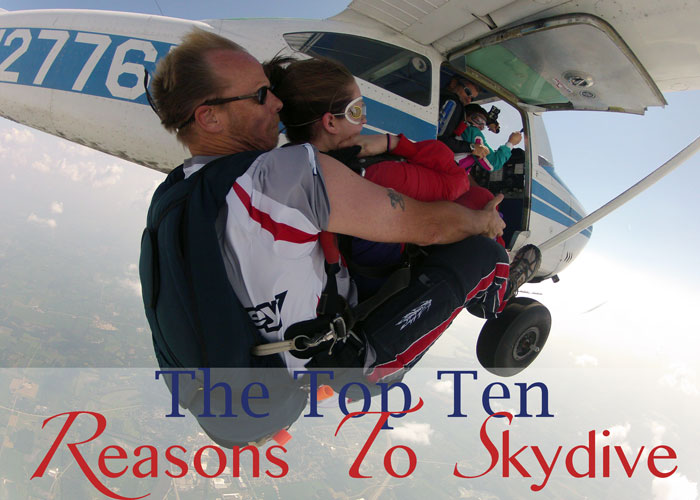 1. It’s the most fun you can have with your clothes on (that’s what people say, don’t shoot the messenger).

2. The view – Wisconsin from above in summer – #SPECTACULAR

4. Be the envy of your friends! Everyone will marvel at you as they say, “Why would you jump out of a perfectly good airplane?” You can smugly respond…”Ahhh, it was no big deal!”

5. Share photos of your skydive on Facebook… you’ll have more likes and comments than you’ve ever had before!

6. Jump with the friendliest people in the industry! Have you met Chris, Luke, Bo, Alex, Rita, Dan and the rest of the WSC crew? They’re AMAZING!!

7. It’s way cooler…as in, the temps are about 20-25 degrees cooler at altitude…it’s the place to be in the summer!

8. It’s the most exciting thing to do on the planet, short of going to the moon! Boom!

9. Get out of a rut – if you’re tired of the same old thing, day in and out, then you should skydive. You’ll literally look at the world differently!

10. No worries, mate. Worried about something or stressed about the future… make a skydive. You’ve never lived more in a single moment than you do when you make a jump!