Freefall certainly wasn’t Joel Graves’ first introduction to adrenaline. That distinction sits on a two-wheeled, motorized, high-velocity throne. “I’ve been riding [motorcycles] since I was 16,” he grins. “I’ve got a ZX10R and a Harley Night Ride Special. So it’s a little bit of both worlds.”

Joel used to do a lot of track riding on the sport bike: mostly at Blackhawk Farms – a 1.95 mile, 7 turn private circuit racetrack located in South Beloit, Illinois. He’s also lain some rubber on a smaller road course in southern Wisconsin, and spent “a bunch of time” on Wisconsin’s legendary Road America. “That’s a fast track,” he laughs.

Joel’s introduction to the sky was much later than his first chicane. He did his initial tandem skydive in 2005, in celebration of his 25th birthday. But not long afterward, the adventure screamed to a temporary stop. “I was out on my Harley and I got run over by a drunk driver,” he says. “I damaged my brachial plexus, so my left arm was not functioning after the accident for a while, and I was in the hospital for about a week for plastic surgery to get all the bones fixed in my face. I ended up getting plates in the left side of my skull, the orbital around my eye, and my cheekbones. They were all shattered. I got lucky though – I lived,” he adds. “And I’m not a handicapped guy out of it. It took a while to get the use of my left arm back – but I did, once the nerves finally started growing back and repairing themselves. There’s still some sensation, things that feel weird on the inside of my arm. That’s just because all the nerves grew back – they just didn’t grow back in the same spot. Weirdly enough,” he continues, “the accident kinda gave me the opportunity to skydive.” 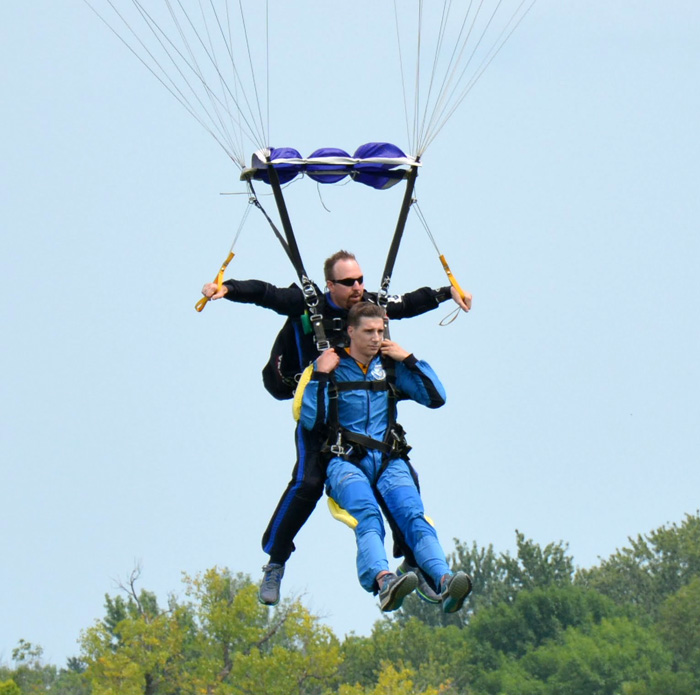 From his very first tandem skydive, Joel had been wanting to get out and complete the solo skydiving certification program. He was hooked from the start, but the world wasn’t cooperating. He had always worked as a skilled maintenance person in industrial settings, fixing equipment and doing projects. For that trade, he worked the night shift – and, when he wasn’t, he was traveling constantly for his job. It was preventatively difficult to get out to the dropzone. “But then, suddenly, my left arm didn’t work, and I needed use of that left arm to be able to work,” he explains. “I was on short-term disability.”

Finding Inspiration at the Dropzone

Joel is the type of guy who doesn’t like to sit around the house. While he healed, he looked for stimulating activities he could do without the use of that left arm: like, for instance, hanging out in the spectator area at the Wisconsin Skydiving Center and watching other new jumpers go through the program. “I had this perfect opportunity to go bum around the drop zone and learn everything on the ground that I could,” he says. “I hung out with Bo and the crew as much as I could.”

“Here and there we’d talk about how I was coming along with my ability to use my arm,” he goes on. “Eventually, after a couple of months, we got the the point where Bo and I walked over to the lean-in harness. We got a couple sandbags hanging from the toggles. I was able to lift the sandbags and actuate a toggle just fine. And Bo told me I was ready. I started my AFF right away. I was really hooked then. I haven’t stopped since.”

As it turns out, lots of good stuff happened to Joel that same summer. Most notably, he met the girl who would become his wife. “She kind of refers to herself as ‘The DZ Wife,’” he laughs. “She’s actually got the license plate on her vehicle that says, ‘DZ Wife.’ At first, lots of people misinterpret it and don’t know what the heck it says. ‘Dizzy wife,’ what’s that about? If you get it, you get it.” 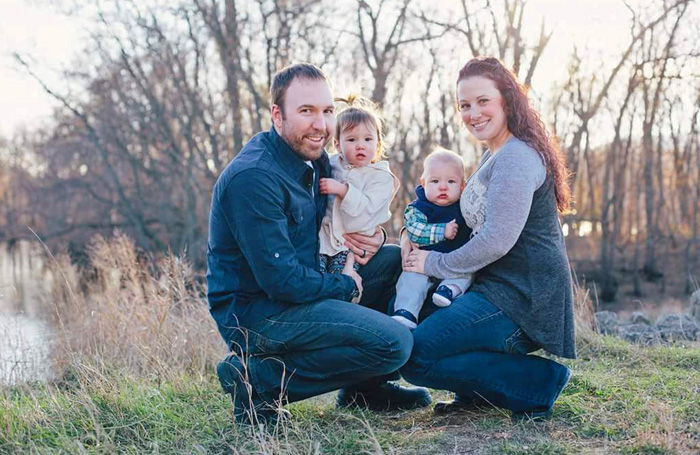 Mrs. Graves takes her adopted role seriously, and we at WSC couldn’t be gladder. “She’s always bringing out food, or sending out food with me for everybody,” he smiles. “We have a communal table at the back where any food that hits the table is open game, and she loves to contribute. On pretty much any jump day, there are a couple platters of something back there, whether it’s rice-crispie bars, or cut up fruit, or you-name-it.”

For the Love of Community

Suffice it to say: Joel can find adrenaline on any given bit of pavement, so it’s not just a rush that he looks for when he comes out to the DZ. It’s that communal atmosphere that Joel really, really loves.

“You hear about Midwestern hospitality when you’ve been born and raised here,” he muses. “I didn’t think it was a real thing until I started traveling. There have been some places where I was really surprised, you know? People kind of almost made fun of it, like, ‘Oh, you’re like that hokey Midwestern friendly guy.’ Well… no. We just treat people like people, you know?  We hold the door for each other and say good morning when we pass by. And that’s something we reflect in our dropzone. I love it. I’ve never really jumped anywhere else.”

“I truly love doing tandem skydives,” he adds. “I love doing work jumps – well, what I call work jumps, they’re not really work, right? It’s really awesome seeing people discover why we love our sport. And why we’re so hooked on it. I love taking people on their first journey and showing that to them – opening their eyes. That’s the majority of that is what my jumps are. I love doing anything related to skydiving and I love working with students.”

The Zen of Skydiving

Joel’s love of teaching reflects in everything he does – and has made him a beloved figure on the WSC dropzone. He has a 100% “happiness track record,” and he’s understandably proud of it! 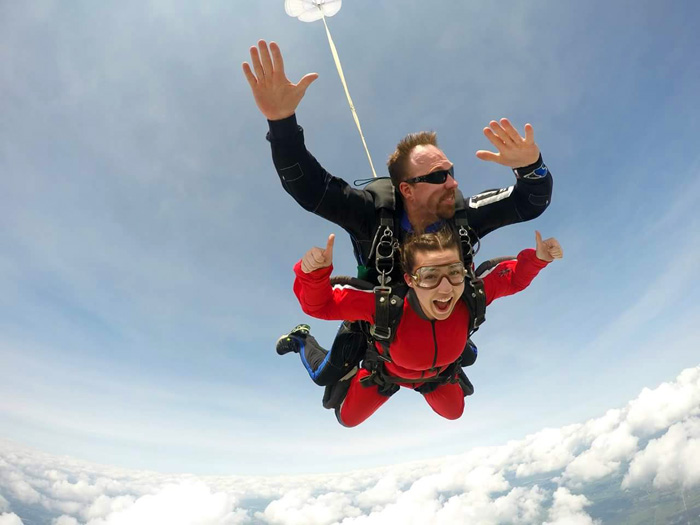 “My advice to every new skydiver is simple,” he adds. “Take a deep breath, smile, close your eyes and imagine the amount of fun we’re gonna have. We’re here to have fun! We’re here because you want to be here. And you’re gonna feel so accomplished and happy that you did this. I haven’t had a refusal yet. I think it’s all about just reinforcing that confidence in them.  That they are going to have a good time; that they’re not going to regret it; that they can do it.”

“Every person I’ve ever taken on a skydive who was on the fence about it,” he explains, “ they tell me they’re happy that they went, they really are glad that they experienced it, and they really did enjoy it – even if they don’t plan on doing it again. I think that’s really special and I feel honored to be a part of it.”

Come meet Joel and the rest of the WSC crew for your tandem skydive this summer! Contact us to schedule your jump or if you have any questions at all.