When Jenny Rogers did her first tandem jump at Wisconsin Skydiving Center in 2004, she had no clue how much it would change the trajectory of her life. Though as destiny sometimes wills it, on that momentous skydive, she met tandem instructor Charlie Rogers for the first time. 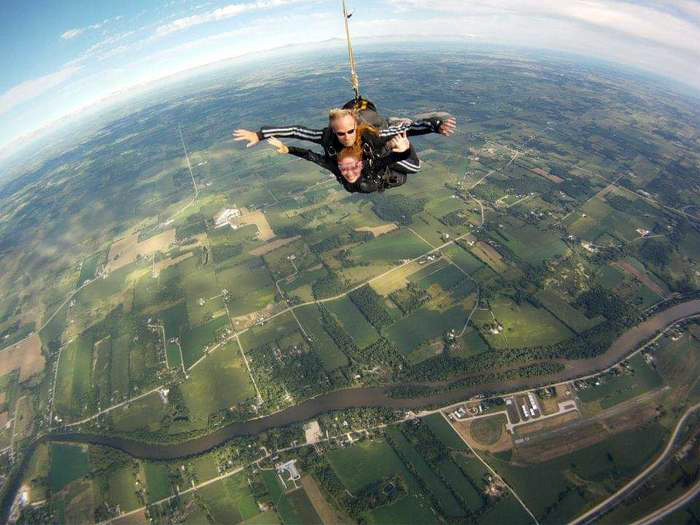 Jenny was actually doing that tandem skydive not alone – she was accompanied by her fiancee at the time. As fate would have it, however, she found herself single not too many months later – and kept thinking about that handsome skydiving guy, Charlie. They dated for a short while in 2005, and then Jenny found she needed to “tidy up some drama” in her life.

The Perks of Being Married to a Tandem Instructor

A few years later though, Charlie and Jenny went on a trip to Hawaii as friends. They came home admitting to being a solid couple. In 2013, they took the plunge into married life and have since continued their journey with heaps of adventure – and the inevitable struggles that accompany balancing work and skydiving.

Jenny has never felt the need to get her skydiving license, but she does have 30 tandems to her name and manages to fit in a few jumps every year. In the early days, there was no guarantee that Jenny would get Charlie as her tandem instructor. In fact, it took 6 tries for Charlie to get Jenny as his student. Being married has definite perks though – he now gets her for *all* of her tandems. Jenny says Charlie always has something new and exciting up his sleeve for each jump, and she can’t wait to see what he has in store for them next.  She has jumped with the majority of the outstanding tandem instructor team at WSC, and though they’re all incredible, she obviously has an all-time favorite… 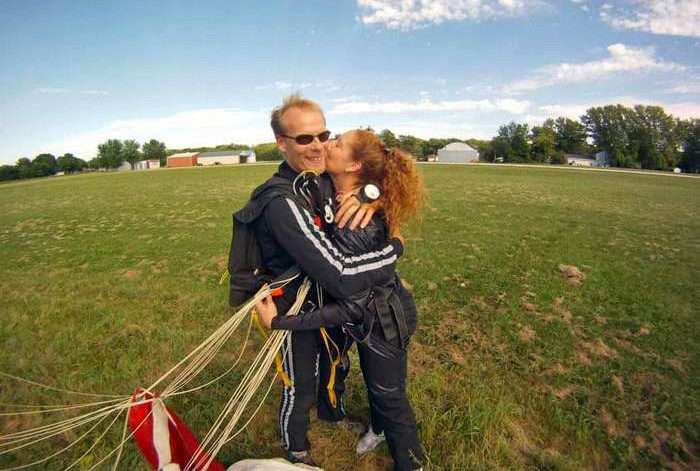 When you spend time talking with Jenny and Charlie, it is apparent the honeymoon is not over. They love being married and working as a team, balancing their various passions with their regular weekday jobs.

Jenny has been a programmer with Frontier Communications for 20 years. Charlie works for the city and if you have read his bio, you know he is the most hated man in town. Writing parking tickets and working for the city government can have some harsh downsides, and Jenny says his weekends at the dropzone are the balance he needs.

When asked about her passions and hobbies, Jenny says, “I love to travel. And I confess to being a total outdoor junkie. Really, I adore any outdoor activity – hiking, biking, swimming, kayaking, skiing (both snow and water), you name it. Though, as it turns out – the best outdoor activity of all is walking our dog, Bella.”

And Puppy Made Three 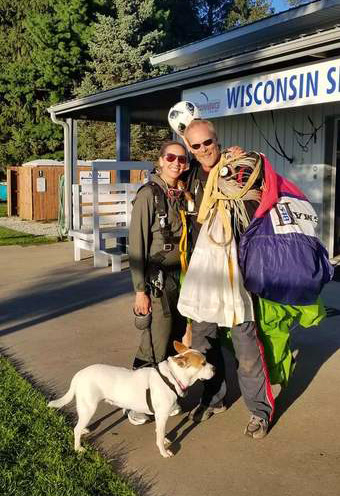 Bella joined the family about 4 years ago via a foster program, and ultimately adoption. Jenny was visiting her dog-fostering cousin when she noticed a marshmallow and butterscotch-colored fluff ball. Her cousin asked her to take the new foster for a walk – and next thing she knew, the dog was staying at her house “for just a few days.”

Charlie was at first not keen about fostering a dog. Not surprisingly though, the word “adoption” was on his lips within short order. When he found out they might not be automatically approved to adopt Bella, there was discussion about a hasty escape to Mexico.

Luckily, it all worked out in the end. Bella stole their hearts, and being a mutt mix, they often fondly refer to as an AmBosChowBox. Two years ago their fur baby was diagnosed with an aggressive blood cancer. Bella has defied the odds however and far outlived her prognosis. Woof!

Bliss on and off the Dropzone

So – what is it really like to be married to a tandem instructor, Jenny? She admits “During the skydiving season, Charlie is at the dropzone almost every weekend. He lives and breathes skydiving with a passion. That means I’m often alone on the weekends, and that has its ups and downs.” The routine could be a tough thing to balance in a marriage, but Jenny says: “I knew what I was getting into when I married Charlie. I would never deny him the ability to pursue his skydiving passion. The positive outcome in all this is Charlie comes home happy and re-charged at the end of the weekend – and how could I not love that?”

Jenny Rogers had no idea how much love, joy, and adventure that single tandem jump decades ago would bring into her life. Sharing a life with a partner so passionate about giving back and being positive has made for a beautiful journey together. Love wins, and we wish nothing but Blue Skies for Jenny and Charlie.