From the start, Michael Dix had always wanted to fly. Like most of us, he just took a while to get there — but now he’s one of our favorite WSC family members and we couldn’t be prouder to call this amazing dude our friend. This is his fascinating skydiving story.

From Superman to SWAT

“From childhood, I always had a fascination with superheroes,” he smiles. “Superman was one of my favorites.  He could do everything. He was strong and could fly. There was a fascination with flight and the freedom I was sure it brought.”

Always very active, Michael aimed to nudge his life along that Superman vector. As he grew up, super-focused on his sports, a career in the military kept coming to mind. “I knew if I went into the military, I would want to join some special forces unit because I figured, they got to do fun things,” he muses. “They got to skydive, for instance.” 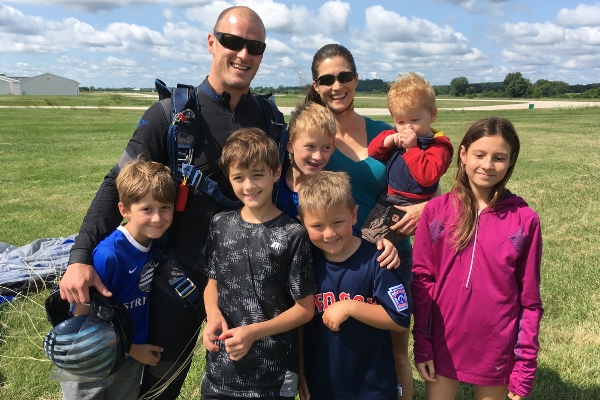 In the end, the military wasn’t in the cards. Instead, Michael took a very different path. He graduated; went back to school; became a teacher; got married; fathered four boys. By a twist of fate, he ended up getting into law enforcement – and he’s never looked back.

“It was kind of full circle,” he says, “because I’m doing what I aspired to do, in a lot of ways, but in a different form. I’m a very naturally protective person; very loyal. My physical attributes and my love for physical activity and things like that just blended together and led me here.”

The Eternal Sleeve Tug of Skydiving

He was good at it, too. Well-liked and respected, he made his mark quickly. When Michael landed a spot on the SWAT team, he was one of the only guys in the unit who hadn’t gone through the military. His partners were, for the most part, special forces guys — guys who had done their skydiving training while they were in active duty. And their stories pulled Michael’s old dreams of flying right back into the light.

“They would talk to me about their jump certifications,” he remembers. “And they would show me videos of them jumping out the back of a C130 airplane. I was green with envy.”

The idea of making that first jump started to loom large for Michael. Unfortunately, his wife at the time wasn’t a fan of the idea. “I was already risking my life serving thousands of search warrants,” Michael explains. “So I didn’t push it. I understood. I had empathy for what she already had to deal with, so I put it off.”

Then, in 2016, a hammer dropped out of the blue. Michael’s wife filed for divorce. It was a hard, dark, confusing time.

Then, one day that following year, Michael made an interesting discovery. He came across a Groupon for a tandem skydive. It felt really important to do. He’d wanted to jump so badly for so long, and he’d been through so much – and now he was finally free to have the experience. He purchased the Groupon immediately, made the reservation and arranged for childcare for his boys. The third-party scheduling agency through which he’d booked gave Michael the address of an airport that was a bit south of Fort Atkinson, Wisconsin. He drove out there at the specified time, buzzing with excitement and anticipation. 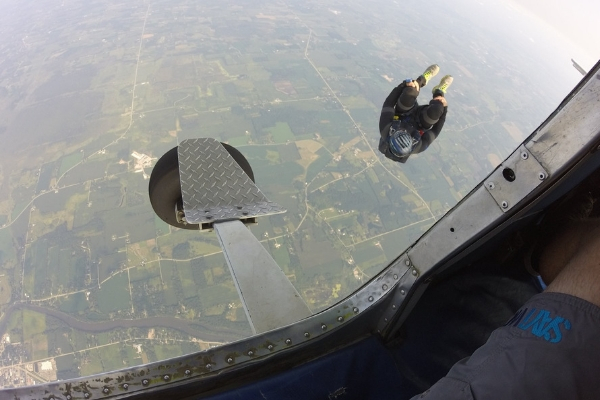 “But then I got to this airport and something didn’t look right,” he recalls. “There were two older guys sitting in front of an open hangar that had a bunch of ultralights in it. I said, ‘Hi! I’m here for my appointment. Where is the skydiving?’ And they looked at each other and then at me and said, ‘Sorry, buddy, there’s no skydiving here. Just ultralights and hang gliding.’ I’m like – you’ve got to be kidding.”

The old-timers gave Michael directions to another municipal airport between Jefferson and Fort Atkinson. He hopped back into the car and onto the phone, immediately dialing the third-party agency that he scheduled the dive with to give them a piece of his mind. He was still on the phone (with a manager who was insistent on blaming Michael for the mistake) when he pulled up to the WSC dropzone.

“I saw people coming down, so I knew there was skydiving here,” he says. “Still on the phone, I walked up to the counter. There was a young lady at the counter named Ambrosia. I explained to her what was happening.”

“She called Bo over, and that was the first time I met Bo,” he continues. “Bo explained that they don’t use Groupon. He said ‘Man, I’ve seen this before, and that’s why we don’t do this. I’m so sorry.’ I was pretty low at this point. I’d spent all this time arranging for the jump itself and I had no idea when I’d be able to do this again. But then Ambrosia comes around and says, ‘Well, do you want to jump anyway?’ and I said, ‘Absolutely! How long is that going to take?’ I was expecting a few weeks. She was, like, ‘Eh, 45 minutes.’ Of course I said yes.”

An Overwhelming Sense of Peace

It was a perfect day: 80 degrees, not a cloud in the sky — flawless. Andrew was Michael’s tandem instructor that day, and Elliot was the videographer.

“It was a blur getting up there,” he grins. “Through everything I’ve done in law enforcement — I’ve served 2,000 search warrants and I’ve been shot at a number of times — I’ve been through a lot of stress training. I know the process of anticipation. When we were flying up, I was waiting for it to hit me in some way, and it never really did. I was eager. I wasn’t sure what it was going to be like. But at the core of it, I never felt unsafe.”

The next thing Michael knew, Elliot was on the strut, pointing a camera at his grinning face.

“I looked at him, stuck my tongue out,” he laughs, “and the next thing I know I’m flying. I couldn’t believe it. One of the things I didn’t expect was this sense of overwhelming peace. It was unbelievable.”

How to Short Track to a Skydiving License

When the skydivers landed, Andrew and Elliot were both laughing. Apparently, Michael had been screaming “I’m gonna do this again.” He ran right back to the counter to do just that.

“They told me I could get half another tandem jump,” he says, “but Ambrosia said nope, you are not doing that. You are getting on an AFF course, and I was like yes, of course I am. A couple of weeks later, I was learning to skydive.”

Michael earned his A license in October 2017. He’s about to test for his B license. Still a teacher at heart, he now intends to get his instructional ratings so he can share the sport with brand-new skydivers just like he was when he first walked through our doors — a beautiful human with a huge heart and a yet-unrealized love of flying.

“I love the idea of giving this to other people,” he smiles, “Because that’s what’s been done for me. Bo and Alex and so many wonderful people at the WSC have invested themselves in me and I want to carry that on.”