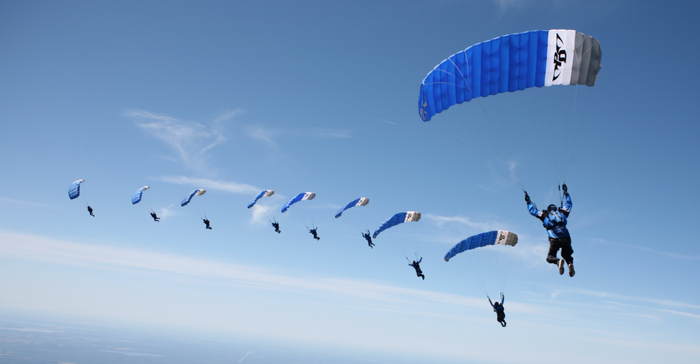 This weekend, we are excited to be hosting one of the most recognizable names in the sport – Shannon Pilcher. We are honored to host Shannon as he brings his massive knowledge in canopy flying and 4-way to our community.

If you’re not familiar with Shannon, he’s the original founder of the most recognizable team in skydiving history – the PD Factory Team and co-creator of the Flight-1 training program. The best part about Shannon is how approachable he is (zero skygod attitude) and humility. Feel comfortable approaching him with any questions!

Shannon’s introduction to the sport came in 1991 while a student at Georgia Tech studying Building Construction (management). He began with a static line jump and quickly progressed to being on a competitive 4-way team with the GT Skydiving Club (with only 36 jumps) competing as Laminar Flow / Genesis. Team Genesis would become the first skydiving team in history to win both the US Collegiate National Championships and US Nationals in the Intermediate division in the same year. It was clear skydiving would be a big part of his life going forward.

Today, Shannon has over 17,000 jumps and now travels the world teaching the world’s best canopy pilots and military teams but is also the coach for one of the top 4-way teams in the world – SDC Rhythm XP.

Not only has Shannon has been at the top of the sport in canopy piloting, but he was also part of a world record for most points in 35 seconds – 43 with Spaceland Force during the 2009 USPA Nationals (see video below).